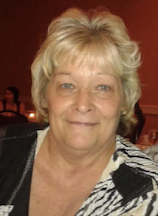 Donna Lou Sell Nichols went to be with the Lord on Tuesday, June 1st, 2021 after a long battle with cancer and heart problems. Donna was born on September 13, 1957 in Independence, Missouri to Russell “Don” and Ethel “Lou” Sell. She later attended Luff Elementary, Palmer Junior High School and Truman High School, where she graduated in 1975.

Donna was very active and vibrant in her earlier years, and was a lot of fun and an extremely loving wife, mother, grandmother, sister and daughter. Donna leaves behind a loving and devoted husband of 38 years, Glen Nichols; her “pride and joy” daughter, Kristi Champion and fiancé, Jeff Willey; grandchildren, Connor Don and Kylie Elizabeth Valejo; She was very close with her brother and sister-in-law, Gary and Carla Jean Sell and their children, Skylar Moran and Gabriel Leon. She was preceded in death by her mother and father, Lou and Don Sell, and brother, Ricky Lee Sell. Donna loved her several cousins very much and her remaining aunts, great aunt and uncle.

Donna also loved the Kansas City Chiefs and Royals, NASCAR, her favorite TV shows like Big Brother, The Bachelor, Chicago P.D., and even Andy Griffin. Her favorite music was Country, especially Luke Bryan. Donna Lou was well-loved and will obviously be missed by many. The family is comforted in knowing she went forward in the church about 5 years ago and often spent time in prayer.

A visitation to honor Donna will be held on Thursday, June 10, from 11:30 a.m. until 1:30 p.m., at the Speaks Suburban Chapel, 18020 E. 39th Street in Independence, MO. A graveside service will follow at 2:00 p.m. at Mound Grove Cemetery in Independence, MO, where Donna will be laid to rest. A Celebration Of Life for Donna is tentatively scheduled for this summer and will be announced then later at a later date.

Online condolences may be expressed to the family at www.speakschapel.com (Arrangements: Speaks Suburban Chapel 816-373-3600).