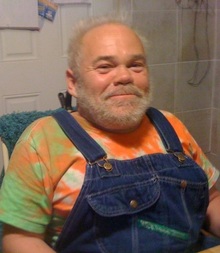 Lewis was born June 3, 1957 in Kansas City, MO as one of three boys to Lewis and Rose Mary (Green) Stamps. He graduated from Northeast Jr. High, Truman High School, and University of Missouri. He worked numerous jobs including convenience stores and security but he especially enjoyed his job at Main St. Pawn where his interest for collecting jewelry, watches, and other items rich in history really grew. He lived life to the fullest when he could. He loved scouting earning Eagle Scout status and participated in Mic-O-Say as Shaman until the early 1990’s. He loved collecting GTO cars and related items. He was really good at Ping Pong and Darts. Lewis also loved music and could be caught playing violin, drums, the harmonica, a little guitar, and attending live music shows. His family remembers him as down to earth despite all his hardships. Lewis is loved and will be missed.

A visitation will be held from 1:00-3:00pm Wednesday, March 23rd at Speaks Suburban Chapel, Independence, MO. A graveside service will be held at 1:00 p.m. Saturday, March 26th at Liberty Cemetery, Newton County, AR.